The Brazilian ambassador in Washington, Nestor Forster, misinformed and distorted facts in a letter sent on the 19th to the president of the US House  Natural Resources Committee Representative Raúl Grijalva (D).  On June 30, the congressman expressed on his Twitter profile solidarity with Brazilian Yanomami people, victims of the “gold mafias”. The post contained a link to a BBC report chronicling the gunning of Yanomami villages by wildcat miners and claiming that the invasions had intensified under Jair Bolsonaro’s term. 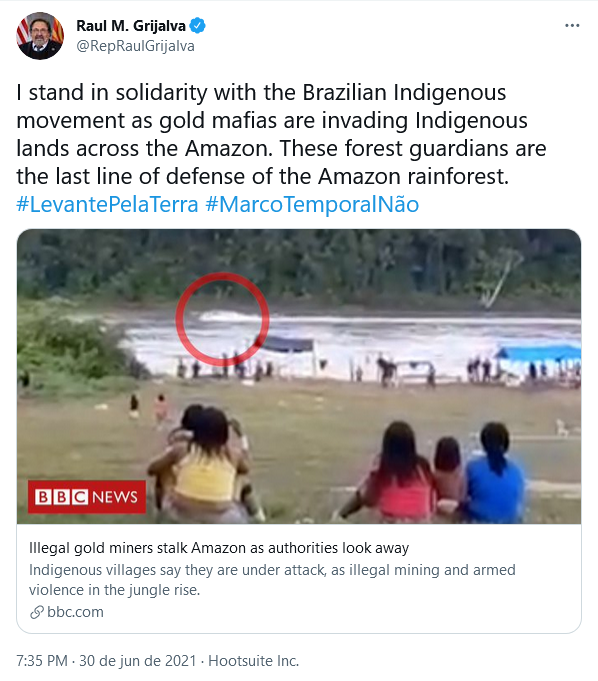 In response, the ambassador sent Grijalva a two-page letter in which he claims that “Brazilian institutions” have been “successful in preventing illegal activities” – which contrasts sharply with the 135% increase in invasions of indigenous lands in the country in 2019 and with the increase in the pace of deforestation in these territories in the last two years.

Furthermore, the ambassador lied when he stated that the Supreme Court (STF) had “authorized” the Executive to act in defense of the Yanomami and Munduruku territories, invaded by gold miners. In fact, the STF forced the government to act, and Justice Luís Barroso also criticized the “protelatory” attitudes of the Bolsonaro administration regarding the protection of indigenous peoples against Covid. Read below the fact-check of some points of the letter. The Brazilian Foreign Office was contacted for comment, but hadn’t replied at the time of posting. This post may be updated.

“The Brazilian government is constitutionally obligated to demarcate and protect indigenous lands. In so doing, Brazilian institutions, in compliance with both domestic law and international commitments, have been successful in preventing illegal activities and holdind to account those responsible for criminal offenses.”

Under Bolsonaro, deforestation in Indigenous Lands (TIs) had its biggest increase in 11 years. According to the National Institute for Space Research, 428 km2 were devastated in 2020, an area 64% larger than in 2018, the last year before Bolsonaro.  An analysis by MapBiomas shows that the number of indigenous lands that had some deforestation in 2020 (297) increased by 31% compared to 2019. It is twice as fast as the average deforestation in the country, which increased by 14% in the same period. Deforestation in ILs represented 7.3% of total alerts 2020, against 5.9% in 2019.

Even though the Constitution does oblige the government to demarcate and protect indigenous lands, the Bolsonaro administration has deliberately failed to fulfill that role – the president was elected saying he would not demarcate “one centimeter” of indigenous lands and would seek to reverse demarcations already made, what his allies in Congress have sought to do with Bill (PL) 490. In more than two and a half years of government, Jair Bolsonaro was the first civil president, not to demarcate any indigenous land.

Regarding protection, the current administration was denounced to the UN on July 14th by the Articulation of Indigenous Peoples of Brazil (Apib) and by the Indigenous Missionary Council (Cimi) due to a series of measures that attack indigenous rights, such as the project of government to release economic activities on indigenous lands. According to Cimi, records of invasions in these areas increased 135% in the first year of the Bolsonaro government. The president is also the subject of an inquiry at the International Criminal Court for inciting the genocide of indigenous people.

“Another government response to illegal activities in indigenous lands led to the deployment of the Armed Forces to ensure law and order on those lands and in others that are federaly owned or supervised. These operations, begun on June 28, 2021, in 26 municipalities, will de ongoing until August 31, 2021.”

Reports point out that the military have boycotted operations against illegal mines in indigenous lands in Roraima, refused to destroy equipment used by criminals in protected areas in Pará and Mato Grosso, canceled support for the Federal Police in action against mines in Pará, aborted an IBAMA operation and also gave a ride to miners on an Aid Force plane from Pará to Brasília.

In April 2020, Ibama’s top insectors were fired after an operation to combat illegal mining on indigenous lands in Pará that displeased the president. The military operation in the Amazon, re-instated at the end of June after two months of hiatus, failed in 2020: even with the “reinforcement” of more than 3,000 soldiers in the region, deforestation was the highest in 12 years and the total amount of fines applied by the IBAMA for crimes against flora fell by half compared to 2018.

“Furthermore, in May 2021, the Brazilian Supreme Court (STF) authorized the government to adopt all necessary measures to protect the life, health and safety of the Yanomami and Munduruku communities in the face of the threat of invaders in indigenous land.”

In fact, in May, STF Justice Luís Roberto Barroso forced the government to act immediately against mining in the Yanomami and Munduruku lands. Ten months earlier he had already determined the adoption of measures to protect the indigenous population from the advance of Covid-19.   In his most recent decision, Barroso criticized the government’s actions, citing “protelatory acts” for vaccinating indigenous peoples in unapproved lands and urban areas without access to the Unified Health System (SUS).   In July 2020, by enacting a law with measures to curb the spread of Covid-19 in indigenous villages, Bolsonaro vetoed the delivery of drinking water, hygiene materials, hospital beds and respirators to indigenous peoples. Justifying the vetoes, the vice president, Hamilton Mourão (PRTB), declared that “in relation to drinking water, the indigenous peoples are supplied by the rivers”. Many of these rivers, however, are contaminated with mercury, due to illegal mining.

“Subsequently, on June 29, 2021, an operation was carried out by the Federal Police and the Ministry of Defense on Yanomami lands in the state of Roraima to reduce violence caused by illegal miners and learn equipment used in these clandestine activities. Supported by air, land, and waterway, federal forces confiscated and/or destroyed four rafts, eleven generators, twenty-two hydraulic pumps, and eighteen camps.”

The president of the Yanomami Hutukara Association, Davi Kopenawa, says that the operations mentioned by Forster “were limited to specific incursions and so far have not covered all the regions and communities affected”. “Once (the operations) are closed, the garimpo returns to normal operation, so that most of the illegal mining nuclei in the interior of the indigenous land remain active. The results disclosed so far, therefore, are of little significance given the real proportion that illegal mining activities have reached in the Yanomami Indigenous Territory”, says Kopenawa in a letter sent to Raúl Grijalva.

A survey released in May pointed to the presence of around 20,000 miners in the Yanomami TI. In June 2021, the area impacted by the mining in the TI reached 2,702 hectares, an increase of 21% compared to December 2020, according to Hutukara. The explosion of mining in the region coincides with the Bolsonaro government’s encouragement to explore indigenous lands, the defense of bills that remove the protection of these areas and the dismantling of Ibama and Funai’s capacity to act in the last two and a half years.

“Finally, I would like to update you with some figures concerning the Brazilian government’s efforts to vaccinate indigenous peoples. So far, 649,687 doses of vaccine doses have been administered, despite exceptional challenging logistical difficulties. Eighty-four percent (343,310) of indigenous adults have received at least the first shot, while 75% (306,377) are already fully vaccinated.”

The National Immunization Program (PNI) has set the goal of vaccinating at least 90% of the target population (indigenous people aged 18 or over served by the Ministry of Health who live in indigenous lands). Indigenous people living in cities did not enter the priority group.

The indigenous population has the demographic characteristic of being young: about half are under 18 years of age, according to the Instituto Socioambiental (ISA). That is, even a successful campaign would leave half the population in the territories still susceptible to Covid-19.