We've checked,
Are cattle “firefighters” in the Pantanal? Head of Embrapa distorts facts by associating burning with cattle removal
There has been no correlation between herd size and fires in the biome over the last two decades
Evaristo de Miranda (E), Jair Bolsonaro e o então ministro da Secretaria de Governo, Santos Cruz. Foto: Alan Santos / PR
According to specialists, Miranda's argument is an oversimplification; many factors explain the variation in fire ourbreaks
Share:

In an interview to Rádio Bandeirantes, the head of Embrapa Territorial, Evaristo de Miranda, associated the fires that have already devastated over 27% of the Pantanal’s vegetation cover to a preservation policy that, according to him, has been in force over the last 20 years. Miranda states that cattle were removed from large areas for the creation of conservation areas such as the Sesc Pantanal RPPN (Private Reserve of Natural Heritage) and that this would be one of the main causes of fires in the region.

The argument made by the head of Embrapa, who stated that “cattle in the Pantanal are a firefighter” is the same used by a group of cattle ranchers in a meeting with the Minister of the Environment, Ricardo Salles, in August. “We have been fighting against this model for 20 years, which was to expel the Pantanal people from their origins. Do you know how to preserve the Pantanal? With men and cattle. (…) This model of not being able to raise cattle is the biggest cause of fires in the Pantanal. Without cattle, the Pantanal will no longer live”, said one of the ranchers to Salles at the meeting.

We have checked the statements made by Evaristo de Miranda, who is known as Bolsonaro’s “environmental guru”.

“A fundamental issue, which the media has avoided dealing with, is that cattle act as firefighters (…) When cattle grazes, there is almost no vegetable mass to burn when the dry season comes. (…) And that happens across the region. Cattle have been there for four centuries. So (…) there is a balance there between cattle, vegetation and land use. Now, when livestock declines, for economic reasons, competitiveness etc., when cattle are removed, as it was removed from large reserves that were created in the region, ecological reserves, the Sesc Pantanal RPPN, what happens in these places, when the cattle are removed and fences are erected? The grass grows a lot and accumulates a lot of vegetal mass. When it catches fire, it is a very intense fire, which destroys trees, kills fauna. (…) Even if the fire does not start within the conservation area, when it reaches such area, then we really have a disaster. One of the things to improve fire management is that we really must discuss agricultural and environmental policy in the region. Because the policy that has been in place over the last 20 years, which considers that it is necessary to remove men from the Pantanal in order to preserve it, it is not having good results. It puts these areas at great risk. Of course, it is not the only reason, but intense fires occur in areas where there is no livestock, in preserved areas. (…) When cattle are removed, for each ox that is no longer grazing, at least 100 firefighters must be found.”

According to Miranda’s logic, the more cattle, the less fires. However, official data for the past two decades indicate that there is no direct correlation between variations in the numbers of livestock and hot spots in the Pantanal, as shown in the graph below: 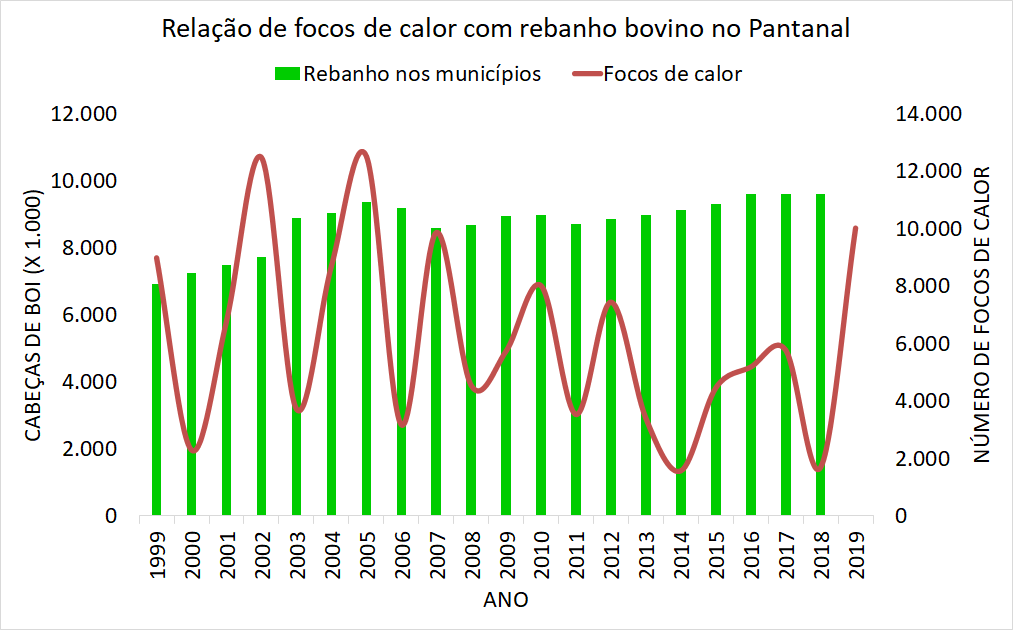 Herd data are from 22 municipalities in the Pantanal region of the states of Mato Grosso and Mato Grosso do Sul  – there is no specific data available for the biome, nor about cattle that may have been removed from protected areas, public or private, in the region. The figures show that the herd in those municipalities remained practically stable from 2003 to 2018, the last available year for which data from the IBGE survey is available, with a fluctuation between 8.5 million and 9.5 million heads. In the same 16-year period, there were major changes in the number of fire counts.

According to data from the Mapbiomas Project, between 1999 and 2018 the vegetation cover in the Pantanal fell 10% and the exotic pasture area grew 64% over natural areas, despite the claim that the preservation model would have removed the Pantanal people and cattle from the region. If the same 1999-2018 period is considered, the herd in the Pantanal increased 38%, from 6.9 million to 9.58 million heads of cattle.

If the increase in livestock had occurred only on new pasture areas, we would have an occupation of 0.3 head per hectare, which is very low, but such increase was not only due to the expansion of exotic pastures, but also due to the improvement in traditional systems of cattle breeding and management, according to agronomist Eduardo Rosa, who coordinates studies on Pantanal for Mapbiomas.

According to him, this reinforces the idea that the conversion of natural environments is not necessary for the implantation of extensive areas of exotic pastures in the biome.

According to Fabio Roque, a researcher and professor at the Biosciences Institute at the Federal University of Mato Grosso do Sul, Evaristo de Miranda and some landowners in the region insist on an outdated dichotomy between production and conservation, which does not take into account the importance of ecosystem services even for the maintenance of cattle and rural production in the Pantanal.

The researcher assesses that “any explanation that tries to find a culprit for the fires in the region is simplistic”. “The pattern of outbreaks over the past 20 years, which is the data we have available, is not so trivial to explain. There is a socio-ecological-climatic dynamic that is a puzzle. Apparently, the length of the drought time is the main factor, after that the amount of biomass from the previous year that was accumulated is also important, then the distance from roads can be an important factor, which is connected with flood pulse, and also the amount of cattle, which explains only a portion of this fluctuation. Cattle do play a role in reducing biomass, but the question is how much sustainable cattle is needed to keep this dynamic running, without losing biodiversity, among other factors”, says Roque.

In Note of Clarification, Sesc Pantanal, the largest RPPN in the country, created 24 years ago, countered accusations made during the meeting of ranchers with the Minister of the Environment and defended that the discussions should be supported by “true data issued by competent authorities”.

“Sesc Pantanal clarifies that, as a private property, it has made an option for the RPPN to follow the primitive profile of the Pantanal, which has no cattle, however, it does not challenge livestock activity in the region. On the contrary, it recognizes the economic importance of the practice. The institution, therefore, does not impose its environmental management model nor does it consider it pertinent that another model be imposed on the RPPN, since it is a private area. The reserve, the cattle farms, the traditional Pantanal and indigenous communities are able to occupy this territory, which is a natural heritage of humanity, and live harmoniously in it.”

Sesc Pantanal also claims that no fires have started within the RPPN area, “as mistakenly reported during the visit of Environment Minister Ricardo Salles”. “Of the total area that has burned in Barão de Melgaço and Poconé, only 12% of the land corresponds to the RPPN.”

In the Pantanal, 95% of the land is private (only 4.6% of the biome is protected by conservation units).

An analysis of the burned area carried out by LASA-UFRJ, in conjunction with Ibama’s Prevfogo, shows that there was no single specific region that was affected: the fire spread from north to south of the biome, over the two states, closest to the border with Bolivia and Paraguay. 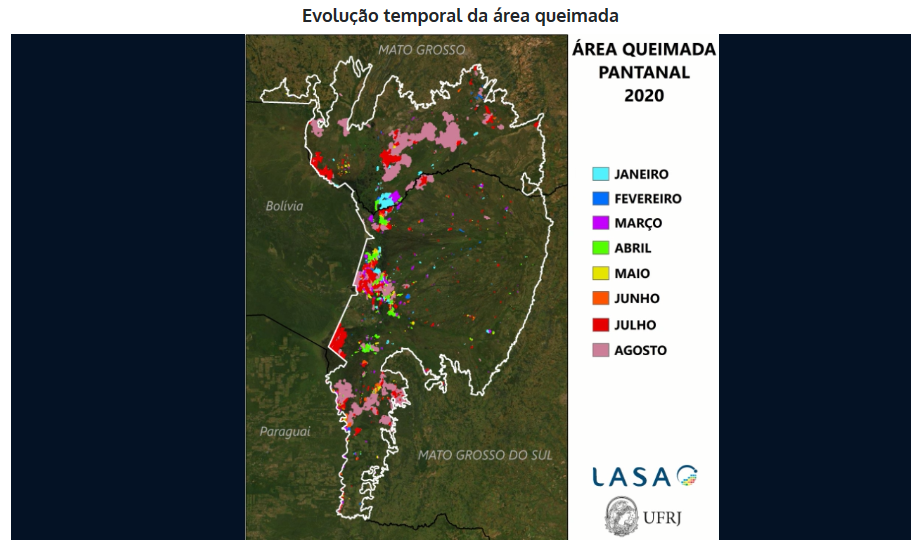 The occurrence of fires in the Pantanal is associated with the region’s anthropization. With the expansion of livestock on extensive areas of exotic pastures, the use of fire to clean these areas is increasing, according to the Mapbiomas coordinator. The management of pastures through the burning of excess biomass, when out of control, is another source of fires, which are aggravated by the dry climate.

Cattle are also a means to manage the grass, but their absence is not the main cause of fires, not least because not all areas in Pantanal have cattle and yet they still catch fire, says Rosa. One of the main problems in the region, according to him, is the replacement of traditional cattle ranching in natural fields by cattle ranching over deforested areas, which converts areas of forest, savanna and natural grassland into pastures through the planting of exotic species.

The process of flooding and drought in the Pantanal causes natural grass to grow during the flood, then this grass dries up and becomes a combustible material. But the big problem is the combination of factors, evaluates the agronomist, noting that the biome depends on the Cerrado and the Amazon regions, in addition to the rivers that are born in the Planalto area: drier years result in drier vegetation, with more biomass susceptible to combustion and a greater fire trend. Issues such as changes in the flood regime and periods of prolonged drought increase the factors that cause fires in the Pantanal. This year, for example, the abnormal warming of the Atlantic Ocean – the same that is causing the abnormally active hurricane season in the Caribbean – is probably linked to an increased risk of fire in the Pantanal and at the Prata basin, according to Douglas Morton, a researcher at NASA’s Goddard Center for Space Flight, a specialist in fire dynamics in South America.